The news of the week, and one of the most important of the month, is the announcement of the GeForce RTX 40 familythe new generation of NVIDIA that, as we have already documented in several publications, such as the one we explained to you eight fundamental aspects of architecture Ada Lovelaceor this one in which we tell you what makes the AD102 GPU unique, marks a new ceiling. But in addition, another very interesting aspect of the presentation was the confirmation of something that we had already expected, and that is that the RTX 30 and RTX 40 families will coexist in the market.

A clear reading that we can extract from said announcement is that, of course, RTX 40 will mark the top of the range, while RTX 30 will set the entry level, although we must make it clear that we are not talking about a low range, far from it. Specifically, as we could see in the presentation, this is the reorganization of the RTX family, with components from both generations:

amdfor its part, will soon present its new generation, the AMD Radeon RX7000 based on RDNA 3, which we also hope will be a big leap from its predecessor generation, the current one RX6000. Although there is no official date yet, rumors suggest that they will finally see the light in an event that will take place on November 3In just over a month. Obviously, we will confirm it as soon as the official announcement takes place.

Be that as it may, and waiting for the arrival of this new generation, AMD also seems to be maneuvering so that the RX 6000 and RX 7000 families coexist, at least for a while, in the market. And not only that, it has also adapted its offer in this regard, in order to improve the competitiveness of its current generation with respect to RTX 30. And, as we can read on TechPowerUP, AMD has lowered the reference prices of all RX 6000 graphics cards. These are the new prices, in dollars. 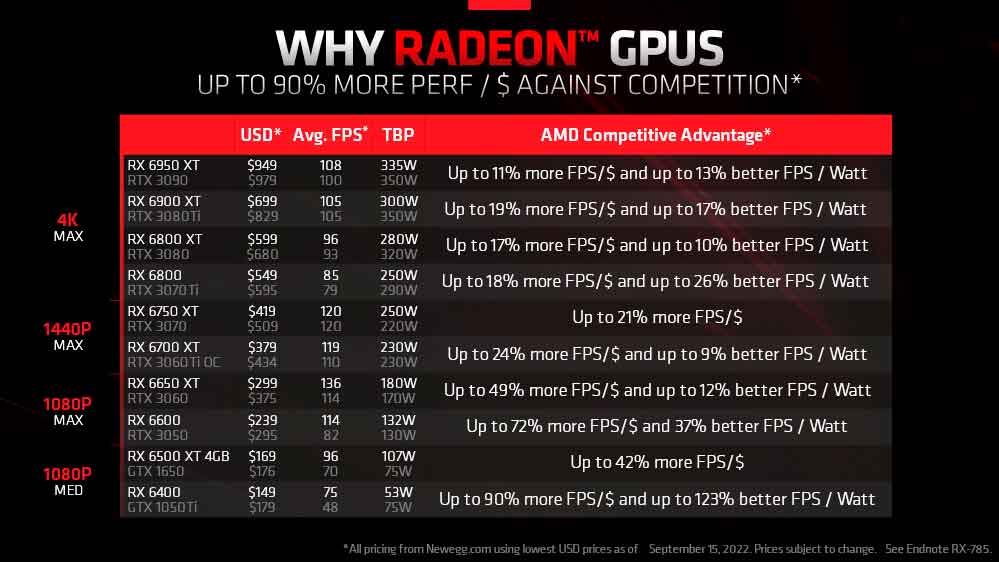 As you can see in the table, which is official from AMD, the technology seems to have designed it already knowing that NVIDIA will keep RTX 30 on the market, but still in the absence of knowing the new reference prices of it. And it is that, as you can see when reviewing the information on the RX 6650 XT, which for AMD is the equivalent of the GeForce RTX 3060, it mentions that the reference price of the NVIDIA card is 375 dollars, and not 329 dollars that NVIDIA announced this week.

Be that as it may, this seems like a pretty smart move on AMD’s part. Both technology companies are aware that, although the situation in the graphics card market has normalized in recent months, there are still many users who look at it with doubts, bewilderment, etc. Thus, now that stock is no longer a problem, and that it is not likely to be again in the short and medium term, maintaining a wider range of catalogues, allowing users to buy what truly suits their needs (and this is somewhat more feasible with the coexistence of two generations in the market), it seems like a success.