Seven days after the fire that occurred in the crude oil storage tank at the Matanzas Supertanker Base, dissimilar signs of solidarity from international legislative and parliamentary bodies continue to arrive in Cuba.

In a letter from the Global Council and the International Parliament for Tolerance and Peace, solidarity was transferred with the National Assembly of People’s Power and with the people of Cuba for the tragedy that occurred.

For his part, the President of the Central American Parliament (PARLACEN), Guillermo Daniel Ortega Reyes, and the Board of Directors, also expressed their support for the Caribbean nation in the face of the unfortunate incident. In addition, “they value the efforts of the relief bodies, as well as the solidary support of the brother countries of Mexico and the Bolivarian Republic of Venezuela, who have immediately come to provide technical assistance and provide equipment to control the situation as soon as possible. the place”. 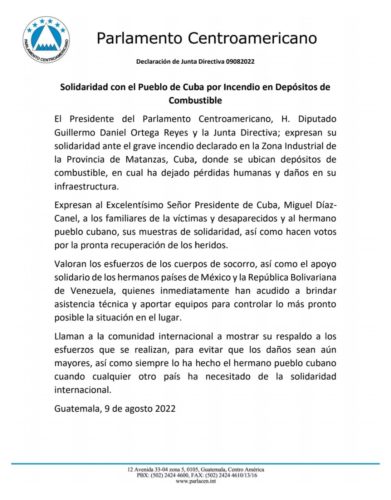 In the Declaration of Solidarity, they called on the international community to show its support for the efforts being made to prevent further damage, just as the brotherly Cuban people have always done when any other country has needed international support. .

The head of the National People’s Assembly of Guinea-Bissau, Cipriano Cassamá, in a letter to his Cuban counterpart Esteban Lazo, conveyed condolences and solidarity in the face of the disaster in the Yumurian city. 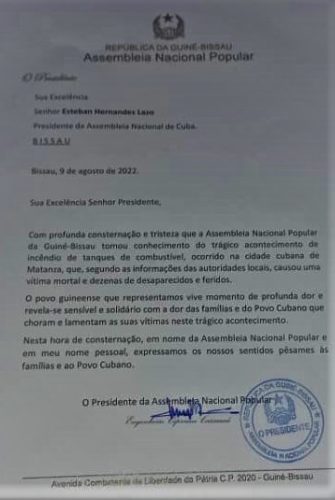 Meanwhile, the Honorable Chamber of Deputies of the Nation of Argentina declared its solidarity with the Cuban Government and people in this moment of pain. “Cuba is a nation that has written epic pages throughout its history, we mourn the human losses and convey condolences to the families of the victims,” ​​the text states.

Deputy Elshad Mirbashir Oglu, head of the Azerbaijan-Cuba Interparliamentary Relations Working Group, stated that in these difficult days, the people of the Asian nation “support the friendly people of Cuba”, his deep condolences to the families of those who died consequence of the fire and wishes for a speedy recovery of the injured. 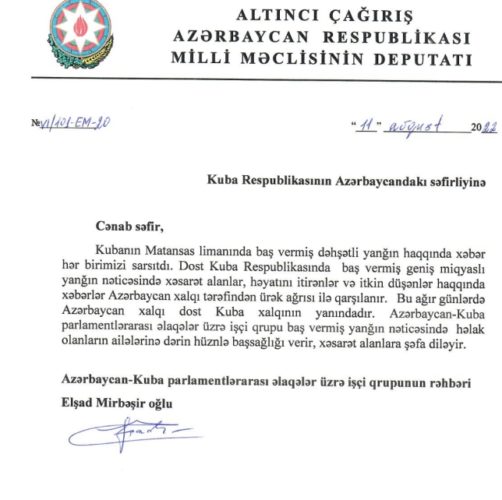 The deputies of the Group of the Communist Party of Greece (KKE) to the European Parliament, Kostas Papadakis and Lefteris Nikolaou-Alavanos –in a letter to the Cuban Ambassador to the Kingdom of Belgium and to the European Union, Yaira Jiménez Roig– expressed the firm solidarity of the KKE to the Cuban Party, Government and people in their efforts to address the problems caused by the accident.

“This is an accident that occurred during a particularly complex and difficult period for the energy supply of all countries and, therefore, the intensification of the fight against the US criminal blockade against Cuba becomes even more necessary and its lifting even more imperative”, specified the MEPs.