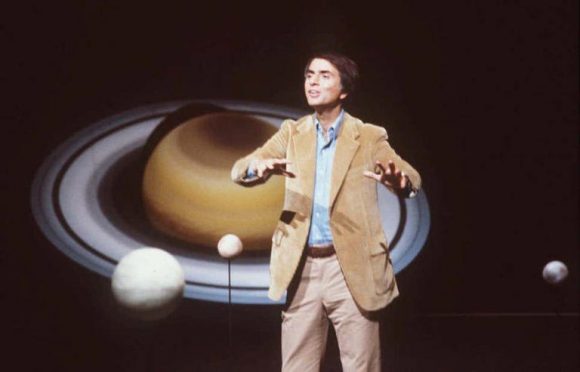 The scene took place in 1995, no less than 25 years ago, when Sagan’s book came out, The Demon-Haunted World: Science as a Candle in the Dark. In it, he explained how the scientific method has helped illuminate many of the darkest corners of the universe. However, he warned of a danger to humanity: superstition and pseudoscience.

Sagan, among his many “trades,” was a renowned science popularizer, something he did especially well at communicating complex ideas simply and poetically in a way no one had done before. In the same way, he was also incredibly accurate about what he perceived as dangers in the future.

In a passage from that book he published in 1995, Sagan lays out his pessimistic view of where the United States will go if it loses its admiration for reason, rationality, and open thinking. A passage that, seen today, seems to be describing American news:

Science is more than a body of knowledge; it is a way of thinking. I have a feeling of an America in the time of my children or grandchildren, when the United States will be an economy of services and information; when almost all the key manufacturing industries have gone to other countries; when the amazing technological powers are in the hands of a few, and no one who represents the public interest can even understand the problems; when people have lost the ability to set their own agendas or knowingly question those in authority; when, clutching our crystals and nervously consulting our horoscopes, our critical faculties in decline, unable to distinguish between what feels good and what is true, we slip, almost without realizing it, back into superstition and darkness.

The passage, like so many others by Sagan, has gone viral in recent weeks. We have collected many of them over time at Gizmodo.

(Taken from Gizmodo in Spanish)