The International Astronomical Union (IAU), is commemorating the 10th anniversary of its Astronomical Dissemination Office, and to celebrate it they are holding a contest to name 20 exoplanetary systems that will be observed by James Webb Space Telescope.

The IAU is responsible for assigning all names to objects in space, and now, with the competition “NameExoWorlds2022“, seek to bring together professional astronomers and the general public, who will have the opportunity to name to the exoplanets selected, as well as their host stars, with the intention of “bridging” space science and Earth cultures.

In order to participate, teams must be formed between students and teachers, as well as amateur or professional astronomers. After, must choose a target systemexchange your ideas and propose the name of both the planet and the host star, as well as additional information that explains the cultural context of the suggestion.

This will be the naming of the planets

The proposals will have a two-step selection process, first a selection panel led by the National Extension Coordinators, where a national candidate will be selectedas well as two additional backup names. 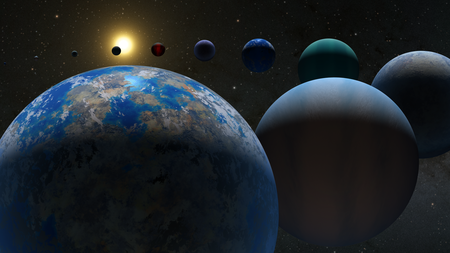 In the second stage, another final selection committee, made up of the Working Group on Nomenclature of Exoplanetary Systems and planet discoverers, from where the candidates proposed by each country will be considered and a name will be selected for each exoplanet.

finally the names will be chosen based on your description and the meaning behind them, as well as the outreach activities carried out by each team.

Once the winners are announced, the associated names will be recognized by the IAU as the official public names of exoplanets on an international level instead of scientific designations which they currently have.