Make a pinhole camera It is the best way we have to get closer to the origins of photography. It is a dark box with a small hole through which the light enters and is projected on the opposite wall of the contraption. In 2020 one was discovered with the photograph with the longest exposure ever taken: Eight years and one month.

We are before a record that will change from time to time. You just have to be patient, a little lucky and remember where you left the pinhole camera. This is the case of the famous can they found in 2020 in the Bayfordbury Observatory from the University of Hertfordshire in England.

The Fine Arts student Regina Valkenborgh made a camera obscura out of a can in 2012. He put a piece of sensitive paper inside of it and left it next to the telescope in said observatory. The observatory’s Chief Technical Officer, David Campbell found it 8 years later and revealed it. And they have gone down in history.

The magic of the pinhole camera

One of the best, and most rudimentary, ways to record the paths that the sun follows in the sky Due to the rotation of the earth, it is a camera obscura. Why? The little light that enters through the hole or stenotope (with a diameter of less than 1 mm) prevents the intense sunlight from burning the sensitive material and allows records of hours, months, and apparently even years.

It is very easy to make it at home. We just need a box that we can make light-tight: from a shoe box, through a detergent box, to the famous can. It is best to paint the interior black, but it is not necessary. Then, as accurately as possible (whenever we can), we make a hole with the point of a pin. Nothing more and nothing less. 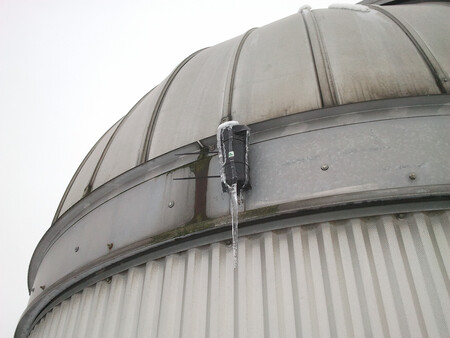 The camera in its original location. University of Hertfordshire

We put a sensitive paper or a negative inside it, on the wall opposite the pinhole, and let time pass. If you have never done it, it is one of the best ways to keep your mouth open. When you reveal the result you always get a big surprise.

The story of a photograph with 2953 solar arcs

And that is what the observatory’s Chief Technical Officer, David Campbell, must have felt when, before throwing away all the pinhole cameras that students must have left over the years, he decided to reveal their contents in case he found anything.

And he found nothing more and nothing less than the photograph with the longest exposure ever taken: 8 years and a month. I’m sure the can had a name and a date on it. And if you are patient, you can count the 2953 solar arcs of each of those days, in which the sun rose and died right on the plane in which Regina Valkenborgh placed the camera:

It was a stroke of luck that the image remained intact, and that it was saved by David after all these years… I had tried this technique a couple of times at the Observatory, but the photographs were often spoiled by moisture and paper. photo wrinkled. I hadn’t intended to capture an exhibition for so long and to my surprise I had survived. It could be one of the longest exhibitions, if not the longest in existence.

The photograph with the longest known exposure

Until the happy discovery, the best mark was that of the German artist Michael Wesely, which registered, for four years and eight months, the MoMA in New York. And the photograph that will change everything will be, if nothing fails, the one you are taking Jonathan Keats, which has prepared the so-called millennium camera to capture 1,000 years of the Tempe horizon, in the US state of Arizona. He placed it in 2015, so until 3015 it will not be possible to know if he has achieved it.

ours is one out of focus photographywith a small trepidation of eight years, with developing stains and some other fungus. But she is unique and unrepeatable. She is a song over time, to uncertainty, to lost causes. That is part of our history. And all thanks to an elongated can of ‘Kopparberg’ cider of no more and no less than half a litre.

The brightest lines respond to clear days, and the darkest to cloudy. Furthermore, we only observe what we cannot see, the path of King Starbut the camera cannot reflect all the people who passed by simply because they did not stay still or did not shine.

Surely this record will stand for a while. Since the news broke two years ago, nothing like it has ever been heard. The author may not put the date on the pinhole camera, or the result may be thrown away without checking.